Posted on December 19, 2018 by donkowalewski 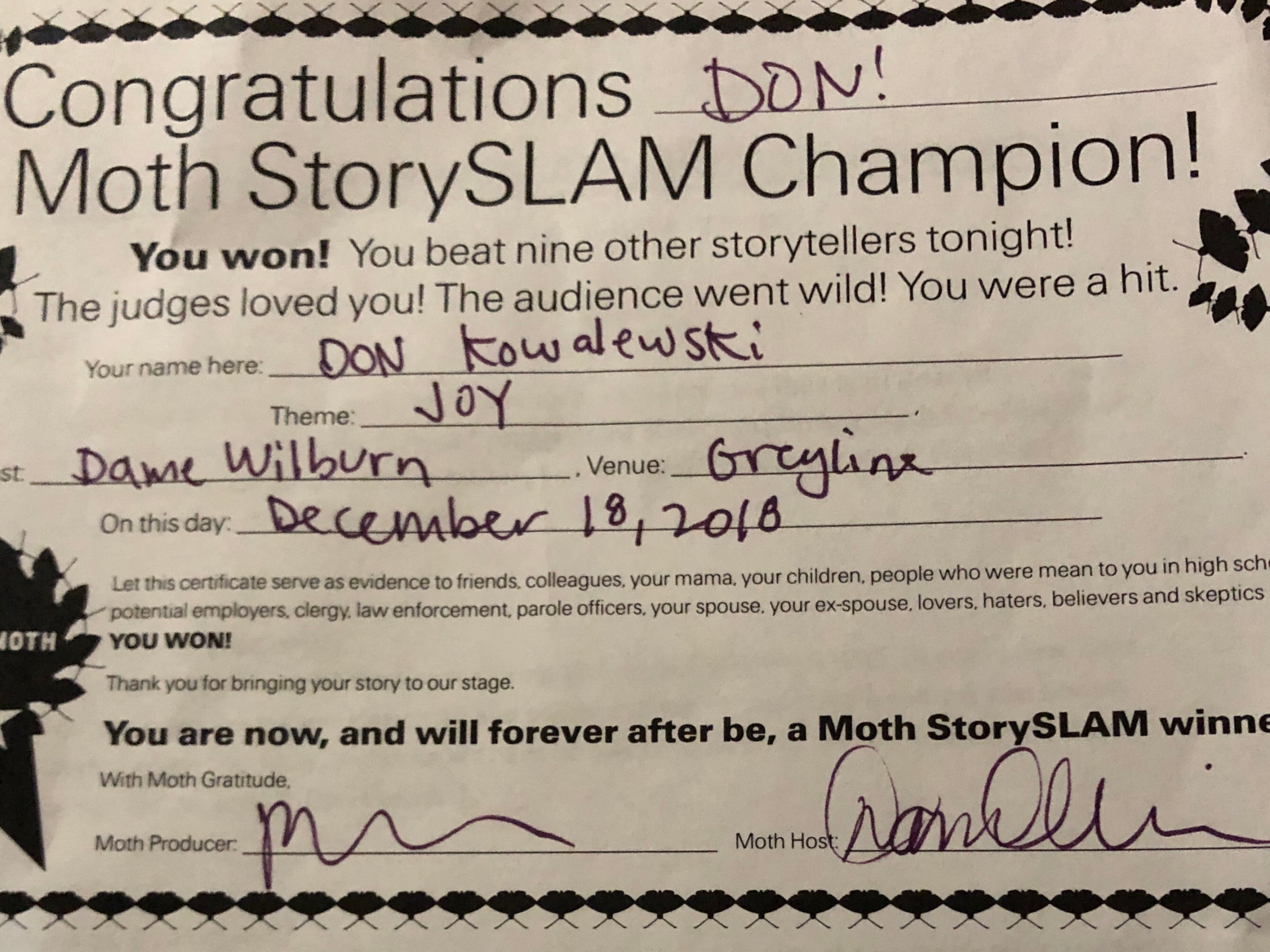 Before you roll your eyes, this is not a humble brag. This isn’t about my ego. Admittedly, at one point in my life (earlier this week?), a Blog entry like this would’ve been all about my ego and showing-off. No. This is me talking about how powerful it is to say you’re going to do something, and then to do that something. But first, let’s get to the part that will sound “braggy.”

Three months ago my friend Matt died, suddenly, at the age of 47. I spent 12 hours in a car, by myself, driving from Detroit to Peoria and back thinking about him and how much I would miss him, and about how young 47 is, and crying… and thinking.

I had all these dreams. I was going to write a book. I have no book. I was going to write a screenplay. I have no screenplay to show anyone. I was going to re-launch my Donnie Jalapeno Salsa business. Why I stopped making the greatest salsa in the history of the world, I’ll never know. But these dreams were nothing more than dreams. Fleeting thoughts in my head that kept me awake at night and I would do everything to ignore them, make them go away, and fall asleep despite the fact I wasn’t living up to my potential. To get all spiritual on you, God has been whispering in my ear and giving me signals for nearly 30 years and I chose to ignore him. And ignore my wife. And my Dad. And all my friends. I figured anyone saying nice things about me or encouraging me were just being nice, like I would be nice to someone who said they were going to quit their job, move to Key West, and open a tattoo parlor, even though this person doesn’t have tattoos, has never worked in a tattoo parlor, and is squeamish around blood. Oh, and this tattoo-entrepreneur (tattooprenuer, Trademark 12/19/18) friend-of-mine has fare skin and would get sunburned living in Key West. We can admit that would be a foolish dream.

My dreams and ideas weren’t as foolish as the Key-West-tattoo parlor dream (for the record, I don’t have a friend with that dream, so nobody has been offended by this Blog entry). Friend and coach,  Nick G. (NickGarciaFormula), asked me why I thought pursuing a creative outlet or vocation was silly? He told me to tell myself a different story.

Then I heard Matthew Dicks on the Art of Manliness Podcast and got Matthew’s book at my library and started listening to his Speak Up Podcast.

And then I talked to my brother and he was already a fan of The Moth, and I don’t remember which of us said, “let’s go and try and get on stage and tell a story,” but one of us said it, and we both agreed, and so we bought tickets, went to The Moth show in Ann Arbor, filled out a form that we wanted to tell a story, got picked, both told our stories, and I won.

Next I’ll be telling a story in the GrandSLAM happening May 2019 with nine other finalists. But that’s not why I’m writing this Blog.

This Blog is to thank my friend Nick for pushing me past my comfort zone and telling me my dreams aren’t silly, for Matthew Dicks and his book and his Podcast and for sharing his gifts, and to my brother who has always been at my side, has always listened to my crazy ideas, has the same sense of humor as me, and for instantly saying ‘yes’ and being 100% in when I said we should go to The Moth. Without him at my side, I might’ve not signed up and instead told myself, “I’ll do this in January.”  Or I might’ve gotten to The Moth StorySLAM and decided not to fill out a form and chosen, instead, to observe and learn. Or if my brother hadn’t been there and also signed up, when they called my name I might’ve looked around along with the other 200 people in the room and acted like, “where is this Don K, guy …he must’ve chickened out.” Nobody would’ve known. But you can’t do that when your brother is there and drove 45-minutes on a Tuesday school-night with you. And you can’t do that when you see your brother get his name picked and he goes up there and bares his soul and tells a story about the scariest, saddest time in his life and tells everyone how, after that, he learned what happiness and joy feel like. You just can’t bail out when all these signs are telling you, “tell your story.”

At the end of the night when all ten storytellers were done, and the judges gave me the highest score, they handed me a piece of paper that said “Congratulations- You are Moth StorySLAM Champion” and I guess, officially, it means I “won.”  But even without that paper, for having an amazing brother, for having a wife and kids that didn’t bat an eye when I spent my Tuesday night driving to Ann Arbor, Michigan and back instead of driving my daughter to dance, helping my other daughter study, cleaning up the kitchen after my wife makes dinner, and watching TV with my son, for having a friend who pushed me onto the stage, and a hundred more friends who wouldn’t laugh at me for doing a StorySLAM …for all of these things, I am a winner every day. 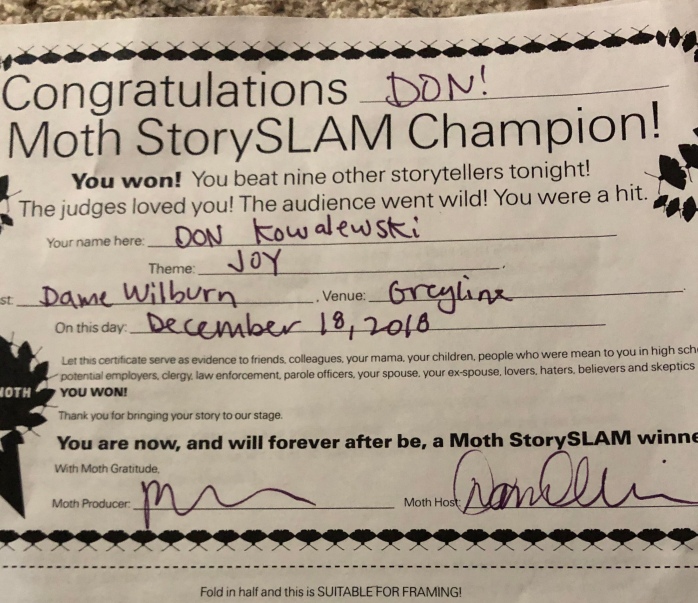 ← Stuff to Read at Other Places
Good and Bad →