Posted on December 21, 2017 by donkowalewski

Don’t tell my wife, but I’ve fallen in love with another woman. Well, another woman’s voice. OK. Not another “woman” in the literal sense, but the female voice that greets me when I say, “Hey, Google,” many, many times each day.

How did I not rush out and buy one of these things the minute it was invented? At one point in my life, I was an “early adopter” of things, and now I’m a Johnny-Come-Lately.

But I don’t care. I love the Google Home Mini that I got in a white-elephant gift exchange last weekend. Yes. It’s only been one week, but that’s all it took to fall head over heels in love. 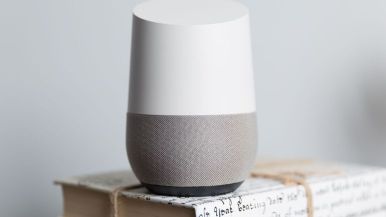 Did I say, “brilliant,” sound? I did. For a small speaker, it has surprisingly quality audio. And when I upgrade to the original Google Home, and pair that with two Minis in well-positioned spots around my main room, I’m going to have a poor man’s Sonos system that fills my house with sound, recipes, news reports, and eventually will control my lights and crap. Remember when I wanted a Sonos system in the worst way? Well …you probably don’t remember, but I did, and now . . . no more.

I’m surrendering my life to Google Home. I have 9 Google Apps on my iPhone, now, and used Googe Assistant to set myself a few reminders. I’m becoming addicted to voice commands.

My life will never be the same.