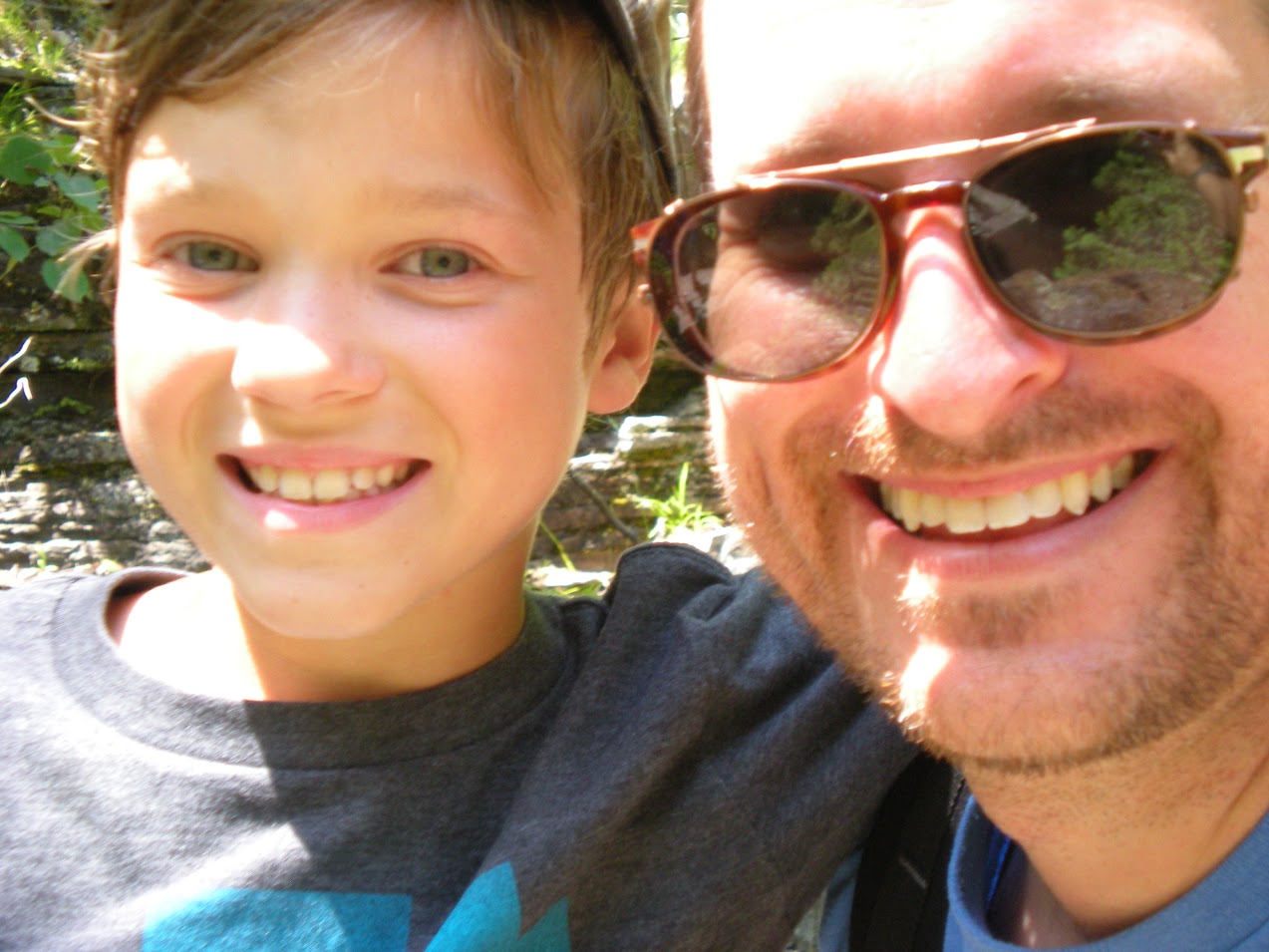 This past weekend I spent 3-nights in Michigan’s Upper Peninsula living “off the grid” as much as this pretty city boy could. My brother-in-law has a hunting compound he’s built with a friend on 100-acres. No running water. No electricity. No Wi-Fi. This “weekend in the U.P.” was the alternative to Cub Scouts for my son (10 years old). Prior to the school year he said he wanted to play saxophone and take lessons, and he wanted to play indoor soccer (as well as fall and spring outdoor soccer), and he still likes playing baseball (another spring activity). And he wasn’t in love with Cub Scouts, except for the father-son overnight camping trip at the very end of each school year.

So I said, “hey, if you don’t love Cub Scouts and the badges and field trips or Pinewood Derby, and uniform inspection stuff, and you only like the ‘boys weekend’ we get to have while camping, how about you quit Cub Scouts and we’ll figure out a weekend to go camping, just you and me.”

Gonna make a long story short. I brought this up to my oldest brother-in-law who said, “you ought to come up to my place in the U.P.” And so I said that sounded great. And before I knew it, three other brother-in-laws and their sons thought it sounded great and suddenly it was “a thing.” A big, huge “boys weekends” with uncles and brothers and cousins and adventure.

So much can be said about this trip, I could write many boring blog entries (or maybe a journal …maybe I should), but the highlight was being with my son for 4 straight days . . . just me and him. I missed my wife and daughters (regardless of what the next few paragraphs imply), but at the same time, um, how do I put this? The three of them are strong personalities, and as my father observed recently, they easily overpower my son.

This weekend. My son had the power. He had the freedom. And the clip below happened at the end of a very long hike through the woods and we suddenly, not knowing it was even there, came upon a place where everyone was hanging out and cliff jumping into the Sturgeon River (which I think some call the “Grand Canyon of Michigan”) and that’s what my teen nephews were really hoping to find. My nephews were all in, without hesitation, and my son had much hesitation. First he was not going to do it because it looked scary. Next it was because he didn’t have a bathing suit. But ..it wasn’t me who eventually convinced him to jump – he convinced himself. He hemmed and hawed. I told him only, “hey, your shorts will dry and, ya know what else,  we make you take swim lessons and be on the swim team and you know how to swim, so I think you’ll be fine.” (Full Disclosure: I was scared for him and wasn’t at all disappointed if he’d decided not to jump).

And then the best moment came . . . not below where he actually jumped (I’ll call that the third best moment …”third?” you ask …just wait). The “best moment” came when he watched his cousins make their way to the big rock and he said, “Dad, ya know what? Why not?” And then he stripped off his shirt and baseball cap and made his way to the cliff.

You can watch the whole video (you’ll see my nephew jump first), but my son’s jump comes at the 1:07 mark. Oh, and if you watch to the end, you’ll see him dump an old lady into the rapids. Pretty funny. But she was an athletic lady and laughed about it. Very cool.

I’ve watched this about 50 times and I can’t stop smiling. It was my son’s moment. Had this been a Cub Scout event, he would’ve been forced to wear a life vest and listen to instructions on proper jumping techniques and waited in line for his one jump (he jumped a second time) and, inevitably, one of the trouble-maker boys at Cub Scouts would’ve jumped in early or pushed someone, or cut in front of my son in line and, heck, who am I kidding, probably the entire thing would’ve been ruined because one of the boys would’ve jumped early and been taken down stream by the current and it would’ve become a rescue mision. I get it. Cub Scouts can’t treat everyone the same and “throw caution to the wind.” And if this had been a family event (with my wife and daughters), my showtime-child would’ve put on a show and my older-child would delighted in trying to scare my son (something she’s very good at), and my wife would’ve insisted I be in the water to help the kids if they got in trouble (for the record, from where I was filming, I also could’ve jumped in if my son had gotten in trouble I was pretty much ready to David Hasselhoff Baywatch in there in a moments notice. Plus, both my teen swimmer/diver nephews were in the water, so it wasn’t like I was totally throwing caution to the wind) and my wife, love her as I do, would’ve immediately become a cliff-jumping expert and been giving all sorts of advice and warnings and tips and . . .

And this is why the weekend was life-changing. Not sure if I made a point or I just sound like I’m saying life would be better if I didn’t have a wife and daughters (which is not my point), or if I sound like I’m foolishly putting too much stock in a fun-filled getaway weekend and, no, Don …life isn’t a nature trail and cliff-jumping and bonfires and fishing. No. It’s not. And I get that. But life can be less complicated. And I can be nicer. And I should be happier. And I should remember what matters and when I see my son, just enjoy the fact I have a nice, optimistic, gentle, kind, semi-serious son who occasionally has pretty intense temper tantrums (don’t worry, readers-who-don’t-know-my-son . . . everyone knows this quirky thing).

It’s life-changing because it reminds me, hey, I don’t need to and shouldn’t want to change my life.

I need to live my life. To the fullest. Every day. Every minute. Now come ‘ere and gimme me a hug.

Final thought. The cliff-jump was the third-best moment. The second-best moment of the weekend was when, on Sunday, my son said, “Dad, this is probably the best experience of my life. Maybe Maui. But probably this.”

Category: Things I Did